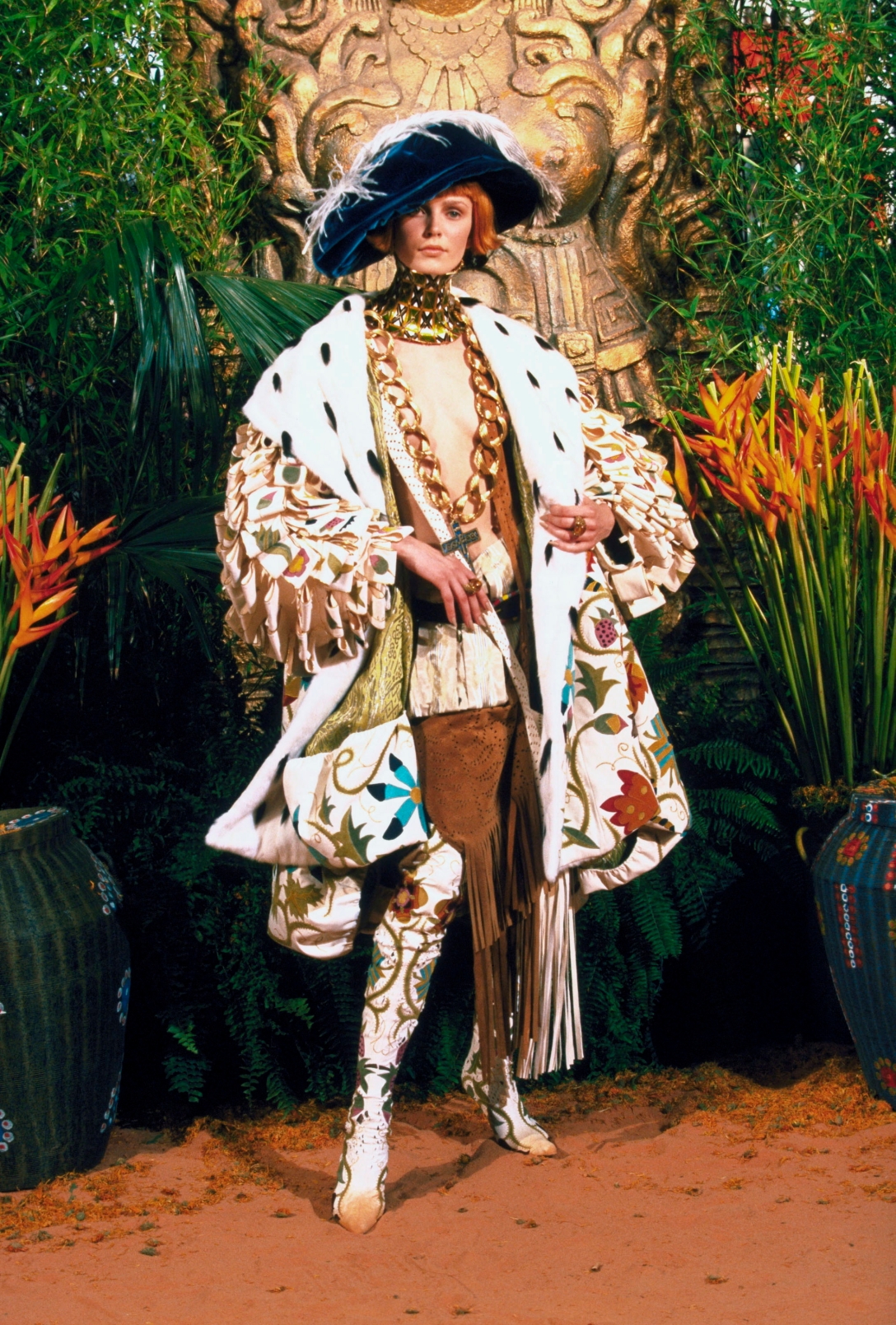 The rise of Donald Trump presidential was facilitated by the waves of populism that radiated from his public figure. Trump attracted voters who felt excluded from existing power, capital and government centers, and from the political discourse of the Obama administration that emphasized the importance of minorities, immigrants and women’s rights. Trump offered another vision, “attentive” to those who felt “left behind” by old-style politics. Trump’s manners, character and proposals were not only populist but also vulgar. Trump uses vulgarity to stick a finger in the eye of good taste. He chose a deliberately exaggerated style, gilded and luxurious, extravagant and rude. Even the image of his wife Melania shows the same spirit, covered in brilliant jewellery, wearing revealing garments. Both have turned the Trump name, stamped on luxury buildings across America, into a vulgar status symbol. Members of the old political elite were dismissive and complained that Trump, the perfect social outcast, does not know how to play by the rules of the “good society”. He is vulgar, they accused. But this is his power.

A new exhibition at the Barbican Centre in London reviews the history of vulgar fashion. Rich and fascinating, the exhibition offers not only a wide selection of contemporary and historical exhibits, but also some critical insights by curator Adam Phillips on the meaning of vulgarity in culture. Within the elegantly designed exhibition, vulgarity emerges as a conscious choice in defiance against the establishment, a bemused game that ignores the rules, a shiny exaggeration that knows no limits, and a sophisticated interpretation of familiar cultural tropes.

The exhibition begins with some dictionary definitions of vulgarity. The word derives from the Latin vulgaris and in turn from vulgus  which has given us also the German word people, volk. Hence vulgarity is a kind of populism. But it is a rough, unrefined populism that defies civilisation. The vulgar person does not belong to the ‘good society’, does not know the rules of behaviour. Eliza Doolittle as a vulgar cockney girl who becomes a “lady” in the musical My Fair Lady, reveals in her persona how vulgarity is rude and embarrassing, but also entertaining and fun, unconventional and “authentic”. Vulgarity needs correction, but it is, in its way, appealing.

Fashion is inherently vulgar, because it can transform a piece of art into a functional object, popular, wearable and commercial. In contrast to sublime art that aspires to be timeless and ethereal, fashion has a price tag and expiry date. At a certain point, it ceases to be relevant and attractive. Fashion designers had reduced the classical art of Greece and Rome into consumers’ product. Fashion copies artistic creations and brands them with a commercial logo. Is the Mondrian dress of Yves Saint Laurent an elegant tribute to modernist painting or a vulgar interpretation of abstract art?

How much gold makes a dress vulgar? Is the gold clergy-inspired dress of the Italian designer Elsa Schiaparelli vulgar or refined? Perhaps what makes the gold dress vulgar is the excess. Vulgar fashion is reckless. It emphasizes and exaggerates design elements irrespective of the good taste and refinement. Vulgar fashion offers no refined minimalism, but crazy rebellion against the bon ton, full of diamonds, glitter, textiles, fur, prints and ornaments. 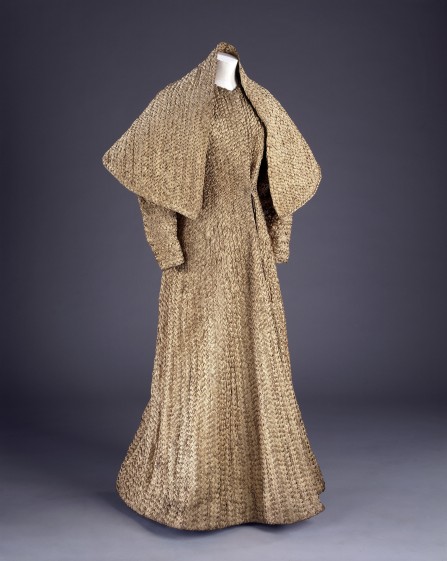 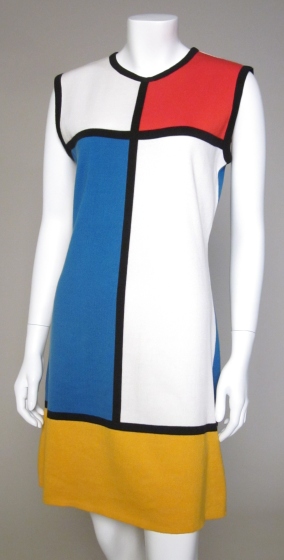 Baroque style is vulgar because it ruthlessly exaggerates and enhances any element of design. But if baroque style offers interpretations on high culture, current vulgarism sends its long hands into the realm of poverty. The combination of luxurious dresses and simple fabrics, like the expensive Miu Miu jeans outfits for spring 2017, is also vulgar. It is vulgar because it appropriates the ultimate middle class fashion item, jeans, and manipulates it into a luxury status symbol for the rich, way beyond the reach of its original wearers. 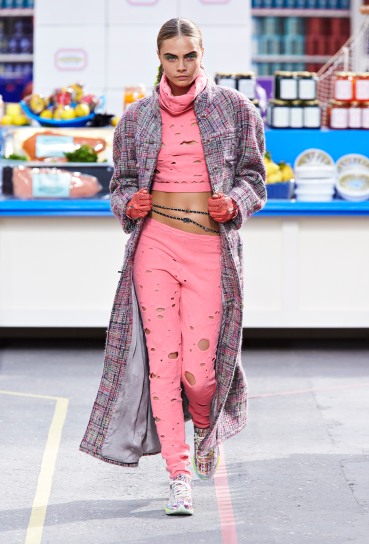 The exhibition manages to evoke aesthetic and moral questions. It is interesting because it draws not only on archival garments but also on that contemporary designer clothing, transferred directly from the fashion shows to the ‘respectable’ museum. This act blurs the thin line between consumer goods and creative art.  Yet perhaps the main message of this exhibition is that vulgarity is the very essence of this blurring, a conscious act of breaking the divide between ethics and economics. However, a moralising attitude would necessarily fail at undoing the damage caused by vulgarity. The reason is simple: as radical British fashion designer Zandra Rhodes declares in a video interview, vulgarity is ultimately a lot of fun. 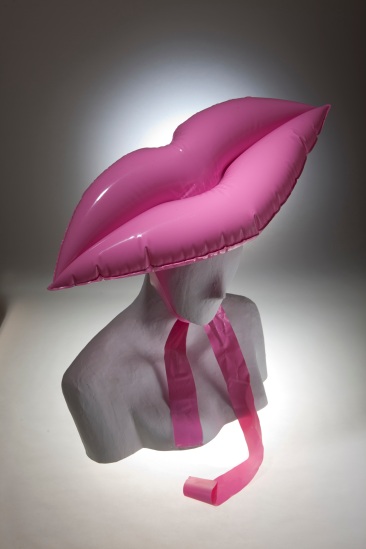 The Companion to Raymond Aron seeks to provide an overview of the works and ideas of the French sociologist, political thinker and commentator Raymond Aron (1905-1983). The main aim of the book is to ‘aid in the study of Aron’s political, sociological and philosophical thought and writings’ (1). It is especially directed at the English-reading audience, where Aron’s ideas remain less known and studied, often due to lack of good English translations of his works. The volume is divided into three parts, representing the main themes of Aron’s work: international relations, philosophy, and the history of ideas. The long list of contributors include French and international scholars of Aron’s thought, such as Serge Audier, Pierre Hessner, Perrine Simon-Nahum, Joel Mouric, Iain Stewart, Daniel J. Mahoney and Giulio de Ligio. The essays seek to shed light on Aron’s versatile and diverse intellectual production, ranging from historical analysis, political commentary and philosophical studies. Each part includes numerous essays on various aspects of Aron’s thought, from totalitarianism to the Cold War, from the philosophy of history to theory of democracy, from Machiavelli to Marx. Furthermore, the volume includes an essay by Aron’s biographer, Nicolas Baverez, and a detailed bibliography of his works by Elisabeth Dutartre-Michaut.

The volume provides valuable studies of Aron’s thought. The essays succeed in contextualising Aron in the intellectual horizon of the twentieth century and in shedding light on the nuances of his thought. The essays share a commitment to depicting Aron as an original liberal thinker who made a lasting, if sometimes under-appreciated, contribution to western liberal thought. Thus, the volume presents a complex, intriguing portrait of an important liberal thinker that goes beyond his stereotypical reputation as a ‘cold warrior’ and anti-communist. One of the underlying aims of many of the essays is to emphasise Aron’s relevance to contemporary thought, and to highlight his importance as ‘the greatest figure in French liberalism of the twentieth century’(3). It is doubtlessly true that, as the contributors to this volume ceaselessly argue, Aron’s impressive and original political analysis deserves a greater attention than it had so far received. Yet sometimes the reader is left with a feeling that a more critical rather than celebratory attitude would have helped some of the essays to do his work justice. Nonetheless, the volume makes an important and welcome contribution to the English-language literature on Raymond Aron.