Few places are as daunted by their past as Sabbioneta, the ideal city envisaged by Vespasiano Gonzaga Colonna in the 16th century. The Duke Vespasiano was a minor member of the famous clan of the Gonzaga, who ruled the near-by city-state of Mantova. Between 1554 and his death in 1591, he dedicated his energies to transforming his little duchy, the forgotten and insignificant village of Sabbinetta, into a humanist’s utopia.

Sabbionetta was supposed to host all the institutions and buildings that a secular cultured humanist could want and need: a frescoed palace with a public art gallery, a large library for scholars to browse his book collection, a municipal palace of government, a theater, a large piazza for public rallies, a church (to satisfy the local clergy) and a synagogue (to attract wealthy Jewish financiers), beautiful parks dedicated to leisurely activities, all surrounded by fortified defensive walls. Inspired by renaissance utopias, Vespasiano built an ideal city to match his political and moral vision as a scholar and art-loving enlightened ruler. 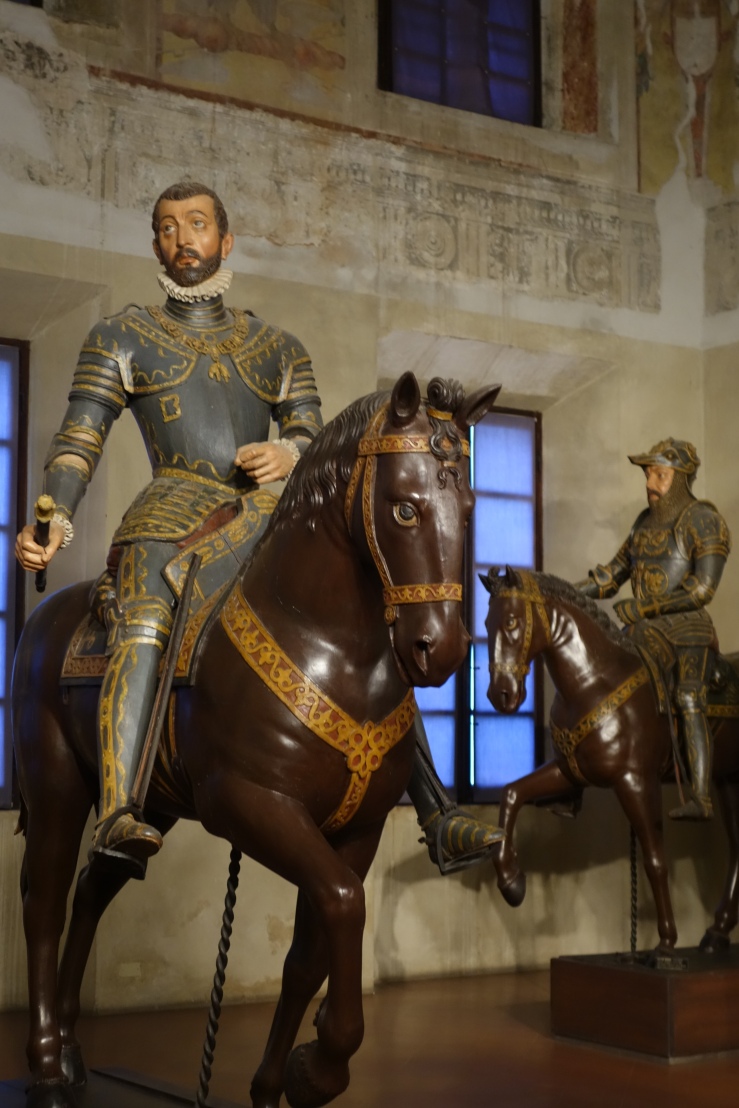 Last winter I visited the city, located less than an hour from Mantova, and found a material example for the power of utopian projects and their inherent limitations. I arrived in Sabbioneta on a cold, rainy, winter day. The bus dropped me off at the gate of the walled city, now surrounded by green fields. I walked into the majestic city square, turned right and entered Vespasiano’s palace. The red-brick monumental building was cold and empty. The humanist duke, an ardent art collector, constructed his palace as a consequence of frescoed rooms that led to the ‘gallery of the antiques’, a large windowed corridor meant to host artefacts from the duke’s collection. Today, the rundown palace hosts temporary exhibitions. At the time of my visit, an exhibition of photography by Andy Warhol enhanced the surreal atmosphere at the empty palace, an ironic suggestion that Vespasiano’s 15 minutes of glory had long passed.

After a stroll in the abandoned synagogue (the Jewish community has long left for Mantova or Milan) and a visit in the local church that hosts Vespasiano’s mausoleum, I sought refuge from the chill of this ghost city in a local café. Between the renaissance monuments, the locals have constructed the necessary spaces for the survival of a small, unassuming Italian village: a couple of cafés and restaurants, a newspaper stand, a post-office and a hardware shop. At the café, the barista told me that even in summer, Sabbioneta lives only through the dreams of its founder. Very few people inhabit the old city, because its fame has raised the rents beyond the locals’ budget, while lack of commercial or industrial initiatives had increased employment.

The insistence on preserving the utopian vision of Vespasiano untouched and unspoilt has alienated many of the young local entrepreneurs. Without an active citizenry, Sabbioneta cannot rise above its mundane existence as a provincial village trapped in an ossified museum city. It lives in the eternal shade of the dead architectural realisation of one man’s political and cultural vision. Vespasiano may have been the perfect ruler, a philosopher-king who envisaged a perfect public life for his subjects. But his vision lived and died with him. He was unable to rally the support of the local population to ensure the continuity of his civil utopia. Without a demos, Sabbioneta has no life. Today, all that is left an empty buildings and a utopian dream, whose ambitious scale any local attempt to revive the city.

Waiting for the bus back to Mantova, I thought that the etymology of Utopia, a non-place, suggested that the realisation of the ‘ideal city’ was a doomed project. Maybe the failure of Sabbioneta provides an opportunity for inward inspection, a soul-searching exercise for planners of contemporary utopias. 500 years after the publication of Thomas More’s celebrated book, a visit to Sabbioneta is a melancholic reminder of the difficulty of constructing a real place according to ideal plans.